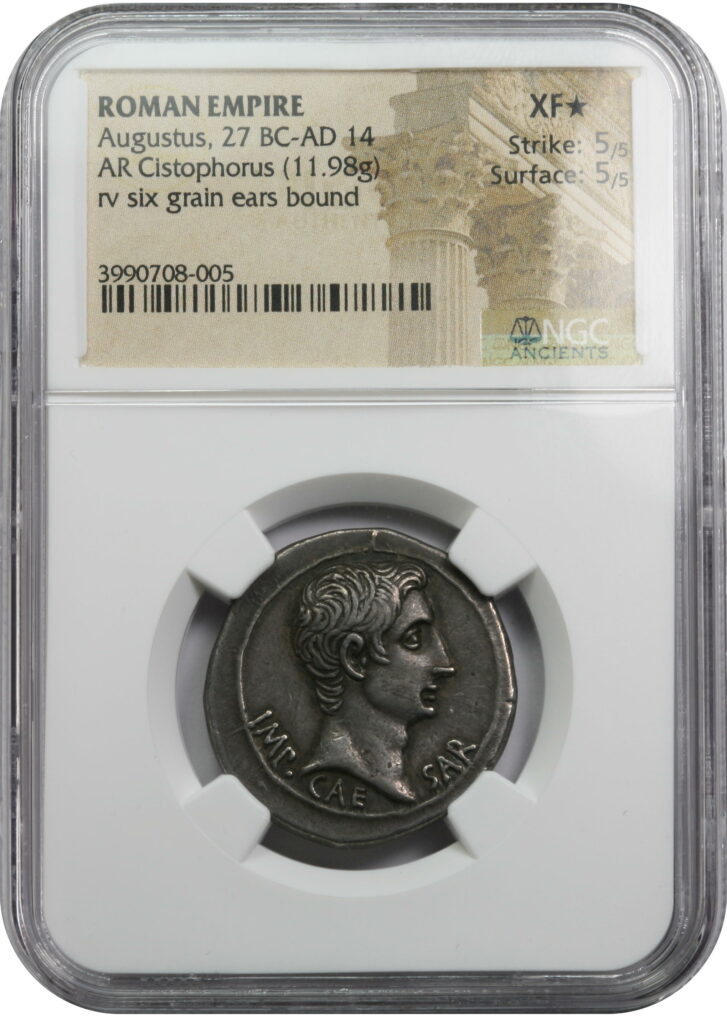 For close to 60 years, Augustus was a dominant player in Rome’s political scene – as the grand nephew and heir of Julius Caesar, Augustus was able to mold the character of the Republic into a truly different system of government, with a ruling figurehead, complete with veto powers , this latter of which had the effect of formally ending the Republic. Rome was now a constitutional hereditary monarchy that would persist for another 500 years in the West, and another 1500 in the East.

Augustus (formerly Octavian) is considered the first Roman “emperor”. An Extremely Fine Cistophorus is on offer here, a sizable silver denomination with a splendid portrait of Augustus. Well struck on good metal, it offers a chance at a fine portrait of the emperor on a silver coin much larger that the more commonly encountered denarii.

Message from our leadership…

To our loyal and valuable clientele, we say THANK YOU!

We are all facing significant challenges in our personal and business lives.  We know that the health and safety of  family and coworkers is of utmost concern so we are taking every precaution possible to ensure that everyone remains healthy and safe.

Over the last 20 plus years we have met and overcame previous challenges with great success and we will do our very best to do the same with this one.

As far as business, the corona virus has pricked the massive 50 year bubble that’s been building within our financial system.  The consequences are likely to be dire and realized with massive inflation as the new, freshly created U.S. dollars hit the streets.  Bubbles always burst and now more than ever it’s time to protect your financial portfolio with precious metals.

We appreciate your patience as we recognize there are delays in delivery of some orders. Many items are on an “unknown” delay primarily due to the overwhelming demand coupled with a lack of supply.  Many Sovereign Mints have temporarily shut their doors and private mints and refineries are working overtime to bridge this gap. Rest assured that when we receive your product, the turnaround will be timely, normally within 48 hours.