By Jeffry Bartash, a reporter for MarketWatch in Washington.

The U.S. national debt topped a record $22 trillion this week, less than a year after it crossed the $21 trillion mark, indicating a further deterioration in the nation’s finances.

The Peterson Foundation said the U.S. national debt has risen by $1 trillion in the past 11 months, calling it “the latest sign that our fiscal situation is not only unsustainable, but accelerating.”

The foundation drew its estimate from the Treasury Department’s daily statement on the government financial assets and liabilities. The group has long called for reducing the national debt to ensure the nation’s long-term financial health.

“We already pay an average of $1 billion every day in interest on the debt, and will spend a staggering $7 trillion in interest costs over the next decade,” asserted Michael Peterson, CEO of the foundation. “In order to build the strong and stable future that we want for America, we must put our fiscal house in order and begin to manage our national debt.”

Economists agree the U.S. will suffer in the long run if the government fails to rein in the debt, but that day may still be a long way off.

The standard method of judging a nation’s fiscal health is to look at the level of debt relative to GDP — or the size of the economy. The ratio of publicly held debt-to-GDP is seen rising from about 78% in 2019 to 106% by 2029 and to as high as 193% by 2049 under current tax and spending policies, the Brookings Institution calculates in a new report.

While the interest payments on such a large debt would siphon off a lots of money the government could use for other things, it’s by no means clear how much the economy would suffer.

Japan has run huge debt-to-GDP ratios for years and it still has one of the strongest economies in the world. The country’s debt is around 236% of GDP.

The U.S. national debt soared in the aftermath of the 2007-2009 recession, accelerated again after the Trump tax cuts in 2017 and an increase in federal spending.

United States Mint bullion sales were unchanged. Below is a sales breakdown of U.S. Mint bullion products with columns listing the number of coins sold during varying periods.

The availability of the 1908 No Motto double eagle in high grade skyrocketed with the discovery of the Wells Fargo Hoard, a cache of 19,000 coins discovered in the 1990s that had been untouched in a Nevada bank vault since 1917. Most examples of the date that grade MS68 today are from the hoard, probably even the present coin, despite the lack of such a pedigree on the holder.  Listed at $19,400 in the CDN CPG and $27,000 in the NGC price guide.

We do business the old-fashioned way, we speak with you…

CALL FOR LIVE QUOTES AND TO LOCK TRADES!

Item(s) subject to prior sale

For the first time in the American Silver Eagle series, a significant variety was released in 2008. This was known as the 2008-W Silver Eagle Reverse of 2007 Variety. The US Mint had slightly altered the reverse design between 2007 and 2008, and they inadvertently struck some 2008 coins with the 2007 reverse type. 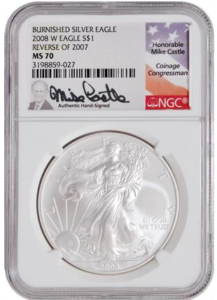 The Reverse of 2007 Variety is the scarcer version of the coin and carries a big premium. Shortly after the discovery of the coin, the US Mint estimated that approximately 47,000 of the variety may have been released. This estimate was based on the fact that West Point Mint employees found 15 dies with the reverse type of 2007.

The mintage estimate was later revised to 46,318 within a response to a Freedom of Information Act request.

We do business the old-fashioned way, we speak with you…

CALL FOR LIVE QUOTES AND TO LOCK TRADES! 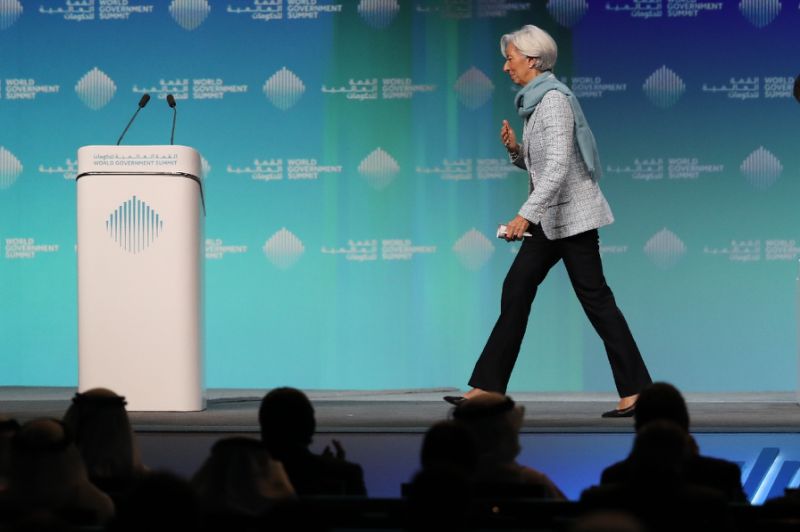 “The bottom-line — we see an economy that is growing more slowly than we had anticipated,” IMF Managing Director Christine Lagarde told the World Government Summit in Dubai.

Last month, the IMF lowered its global economic growth forecast for this year from 3.7 percent to 3.5 percent.

Lagarde cited what she called “four clouds” as the main factors undermining the global economy and warned that a “storm” might strike.

The risks include “trade tensions and tariff escalations, financial tightening, uncertainty related to (the) Brexit outcome and spillover impact and an accelerated slowdown of the Chinese economy”, she said.

Lagarde said trade tensions — mainly in the shape of a tariff spat between the United States and China, the world’s two biggest economies — are already having a global impact.

“We have no idea how it is going to pan out and what we know is that it is already beginning to have an effect on trade, on confidence and on markets,” she said, warning governments to avoid protectionism.

Lagarde also pointed to the risks posed by rising borrowing costs within a context of “heavy debt” racked up by governments, firms and households.

“When there are too many clouds, it takes one lightning (bolt) to start the storm,” she said.

Gold futures edged higher early Friday but remained on track for a small weekly loss in the face of a stronger U.S. dollar, though bulls remained encouraged by the haven yellow metal’s resilience.

“The fact that we are seeing major central banks turn dovish at the same time is probably alarming for some investors, which may explain why stocks have failed to sustain their rally. But this is good news for bonds and therefore noninterest-bearing and low-yielding assets such as gold and silver,” said Fawad Razaqzada, market analyst at Forex.com, in a note.

“What’s more, with the dollar index having just completed a six-day rally, you would think that these dollar-denominated metals would simultaneously be down for the same number of days. However, over the last six trading days, gold has only been down on three occasions, while silver has been down on 5 occasions, although higher today,” he said.

The ICE U.S. Dollar Index DXY, -0.12% a measure of the U.S. currency against a basket of six major rivals, was up 0.1% on Friday, leaving it on track for a 1.1% weekly rise. A stronger dollar can be a negative for commodities priced in the unit because it makes it more expensive to users of other currencies.

U.S. stock-index futures pointed to a lower start for Wall Street, putting equities on track for a three-day losing streak.

The Chinese markets might be closed this week, however concerns about the continuation of our looming trade war continues. Resulting in U.S equities closing sharply lower today and as of 4:30 PM Eastern standard time the Dow Jones industrial average is off by well over a full percentage point and currently trading down almost 290 points a net decline of 1.15% on the day. The NASDAQ composite is experiencing deeper losses today currently down approximately 1.5%, and the Standard & Poor’s 500 is down by 1.3%.

At the same time precious metals are not so black and white, as we see major price differences in gold when comparing current futures pricing to that of spot prices. Currently spot gold is fixed at $1310.40, a net increase of $4.20 on the day. At the same time gold futures basis, the most active April contract is currently unchanged at $1314.40.

Most interesting is that today’s moderate gains in the physical price of gold are entirely based on bullish market sentiment, with traders bidding the precious yellow metal higher by $6.00 per ounce. Dollar strength has resulted in a decline of $1.80 limiting today’s upside move in spot gold, this according to the KGX (Kitco gold index).

Although gold futures are showing very little change on the day, most noteworthy is the fact that after trading to a low today of $1306, prices quickly rebounded and are currently range bound between up $.20-$.30, and down $.20-$.40.

Both silver and palladium are trading higher on the day. Currently silver futures basis the most active March contract is trading up almost 2/10 of a percent and currently bid at $15.73. Palladium is exhibiting gains of 6/10 of a percent, which is a gain of $8.10 today. Putting March Palladium futures at $1359.70. Obviously, palladium continues to outshine and outperform the other precious metals in the complex.

It is an uncommon occurrence for spot gold to be trading moderately higher and gold futures to be trading fractionally lower. That being said we have seen this scenario occur twice in the last two weeks of trading. This might be indicating that gold prices will move higher and that the current price correction might in fact be short-lived.

Washington — The United States Mint will release the second coin in its Preamble to the Declaration of Independence Platinum Proof Coin Series today at noon EST. Launched in 2018, this three-year platinum Proof coin series features all new obverse (heads) designs created concurrently by one designer and a new common reverse (tails) design. The price of the coin on the Mint’s website is currently $1,220.

The obverse (heads) of the 2019 “Liberty” version of the Preamble to the Declaration of Independence platinum Proof coin (product code 19EJ) portrays Lady Liberty keeping watch over prairies, lakes, and mountains as pioneers head westward. The wild terrain in the background evokes the quintessential American spirit to explore new territory and the freedom to pursue new landscapes, ideas, and ways of life. In the foreground, Lady Liberty’s lips are parted, symbolizing freedom of speech. Her torch is an emblem of the guiding light that liberty provides, while the open book represents the rule of law and its equal application. Inscriptions are E PLURIBUS UNUM, LIBERTY, IN GOD WE TRUST, and 2019.

The reverse (tails) design of all coins in this series depicts an eagle in flight with an olive branch in its talons. Inscriptions are UNITED STATES OF AMERICA, $100, 1 OZ., and .9995 PLATINUM. AIP designer Patricia Lucas-Morris created the design, which former Mint Sculptor-Engraver Don Everhart sculpted.

The 2019 Preamble to the Declaration of Independence platinum Proof coin carries the West Point mint mark. This exquisite coin is packaged in a black velvet, satin-lined presentation case that is enclosed in an outer box and sleeve. The Mint’s certificate of authenticity is included.

Pricing is based on the range in which this coin appears on the Mint’s Pricing of Numismatic Gold, Commemorative Gold, and Platinum Products table. Current pricing information is available here.

Mintage for the 2019 coin is capped at 15,000 units. The Mint has limited orders to one coin per household for the first 24 hours of sales, after which the Mint will lift the limit. This product will not be available via the bulk purchase program on the launch date.

If customers want to collect all three, the 2018 platinum Proof coins are still available while supplies last. Customers should look for the final coin in this series in 2020.

Morgan dollars minted from 1878 to 1904 (and in 1921) are America’s most widely collected coin!  Among the coins included in this offering are: a first-year-of-issue 1878 example, a last year of issue 1921-P,D,S three coin set, a Philadelphia example, a Carson City example, a San Francisco example, a New Orleans example and a Denver example. In all, this set contains 70 of the 97 major date and mintmark issues found in a complete collection of Morgan Dollars. All coins are graded PCGS MS 63 and are white, virtually white or lightly toned. The set lists at $14,716 in the PCGS price guide.

We do business the old fashioned way, we speak with you… CALL US TO LOCK TRADES!

We are living in unprecedented economic, social, and political times. In July, the dollar posted its biggest monthly drop in value in a decade. This is likely, in part, what prompted Goldman Sachs to warn that the dollar was in danger of losing its status as the world’s reserve currency.

More than $10 trillion is sitting in money market and savings accounts making nothing, due to 0% interest rates.

Currency is transitory, created by governments and empires that rise and fall. Wealth is permanent, measured in real things. PROPERTY!